Skip to content
I know. I know. It has been three months since I last posted. I know I said I would post more frequently, but then left the Dyson vacuum post up for three months leaving visitors to think I got sucked up by the amazing device. Truth is, I got very busy very quickly. Being a stay-at-home dad was fantastic, and I didn’t want to spend a single extra second away from G.
Shortly after G started daycare (“school,” as Sue calls it), I got very busy planning for a new year of teaching third graders. Before I knew it, first term was over and now Thanksgiving is quickly approaching. As such, I won’t go making any grand announcements about whether I will post here more frequently. Given that this is the first time in nearly four months that I’ve even logged into my Blogger account, I would guess no.
So, what’s been going on? Well, a lot actually. G learned how to walk in late July, which was a major milestone. Since then he’s been hard to keep up with! He started school on August 1, still a little wobbly on his feet, but generally happy to be there. His transition went better than expected, and now he walks in every day with a big smile and a wave for all of his friends. Sue and I have taken to calling him the mayor of his daycare because of the way he walks in.
Sue started school almost as soon as she moved down here. She enjoys it, even though it’s a year-round schedule. She works nine weeks, and then is off three. There’s no summer vacation, except the three between the end of one school year and the beginning of another.
My school year started in mid-August and hasn’t let up one bit yet. But that’s a good thing. I’m really enjoying my students this year. I have to admit that I was nervous going into this year because I didn’t know if I would have the same type of bond with this new group as I did with last year’s group. I do. The personalities are different, and the group dynamic is different, but there is a sameness. It has to be the age. There’s something about being eight that makes it a really special time in your life. More and more memories of that time in my life keep coming back to me. It’s amazing to think of what I was doing then. My favorite toys: Transformers, He-Man, and GI Joe. Those were also the cartoons I watched after school every day… you know, on the local UHF channel, not some nostalgic cable channel.
Over these past few months, though, the biggest thing in my life has been seeing how much G has changed. Just like those first couple of times he stood ready to fall over, he is now starting to make sounds that are sort of like words. Occasionally, he utters “Hi” over and over, but not when it’s time to greet someone. He also says, “maaamaaamaaaamaaa” when he seems to want Sue rather than me, but it’s doesn’t really seem like a call for mama. He points to things that interest him, and loves to carry around anything he can lift. He’s also a good helper. He loves doing “clean up” when it’s time to pick up his toys.
Those are the good things. The tough part has been dealing with his constant cold symptoms – a product of the daycare environment, despite the facility’s best effort to keep germs to a minimum. Knowing that G was well taken care of at home for the first 15 months of his life, I knew he would be susceptible to ever germ that came his way, and it’s now a reality.
In addition to his cold, it seems he takes after his mother when it comes to food. He’s very picky. He loves bread and potatoes, as should any true Irishman, but not to the exclusion of other foods. As such, he’s now a bit underweight and we have to fatten him up, according to the doctor. We’re trying to do so without loading him with sweets. We’ll see how that goes.
Anyhow, I can’t really think of a segue into Halloween, so let’s just say that G’s first trick-or-treating experience was underwhelming for his parents. He was a trooper, staying up late and all, but he won’t be into it until next year. Here’s a couple of recent photos. The pumpkin one is about two weeks old. Enjoy! 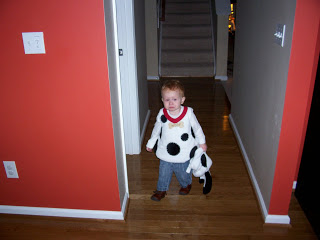 Boy do I love nap time! Not my own naps, of course. I don’t have nap time for myself, but G has two a day! He sleeps usually two hours in the morning and another hour or so in the late afternoon. This is fantastic for doing things around the house, such as, well, updating my blog.

Here’s some updated news, then:

My hiatus from this blog is over now that we have completed our transition from Boston to North Carolina. We are happily living in our new home, and enjoying our family time very much. I get to spend all day, every day with G while I’m on summer break, and for the first time since becoming a true adult, I get to see what it is like to have every day be like a Saturday. It’s quite fun, but it has its ups and downs.

For starters, I love spending time with G. We are having all kinds of fun playing with toys, learning to walk and talk, and discovering the world around us. But being a stay-at-home dad can be very isolating. I have to get better at getting out during the day. (Note to self: Must make lists of things to do away from home.)

In other news, Sue and I are getting settled in the new house. Most of the boxes are unpacked, and some of the pictures are hung. The garage is very nearly empty of the things we want in the house, but not enough that we can park both cars in it. Since we have no basement and very little attic space to speak of, we are going to be very frugal about our storage. Sue and I have had to do our own version of “Clean Sweep” with some things. Sue had to sort her stuffed animals into keep, toss, donate. I’ve had to do the same with my books.

The neighborhood we bought in is nice. The neighbors are friendly, and there’s a pool and park in walking distance from the house. We’re also close to our places of work, shopping, and G’s daycare, which he will start going to later this summer. It’s a far cry from our far flung commutes when we lived in Boston. I went from an 36-mile roundtrip to 6 miles. Sue went from 24 miles roundtrip to 10. The weather is nice, and we are adjusting to the heat fine. The house has central air and ceiling fans, so it stays cool day and night. The outside temps are hot, but not unbearable, like most people from up north think. It’s really not any worse than the summer heat in Massachusetts. It just tends to stick around for longer stretches.

That’s really all for now. I have to go do some real chores before the G-man wakes.